Taylor Swift has written an open letter to let people know the latest in her battle with Scooter Braun and Scott Borchetta, who she says won’t let her perform old songs at the AMAs this month.

Back in July, the singer expressed her displeasure upon learning that her music catalog had been sold to a company owned by Braun .  Braun’s Ithaca Holdings acquired Big Machine Label Group from founder Borchetta in late June. The deal was worth roughly $300 million, according to Billboard. At the time, Taylor called it her “worst case scenario.”

Unfortunately, losing the rights to her early music catalog continues to cause more trouble for her and on Thursday, November 14, the singer released an open letter where she claimed the ongoing dispute with her former music label has presented a new roadblock.

The singer was set to receive the AMAs Artist of the Decade award, but she claims Scooter Braun and Scott Borchetta have gone to new lengths to stop that performance. She said she is being told she cannot perform many songs from her past at the upcoming American Music Awards or use it in a forthcoming Netflix documentary about her life, which has been in production for several years.

Swift wrote: “I’ve been planning to perform a medley of my hits throughout the decade on the show. Scott Borchetta and Scooter Braun have now said that I’m not allowed to perform my old songs on television because they claim that would be re-recording my music before I’m allowed to next year.

She continued: “Scott Bocchetta told my team that they’ll allow me to use my music only if I do these things: If I agree to not re-record copycat versions of my songs next year (which is something I’m both legally allowed to do and looking forward to) and also told my team that I need to stop talking about him and Scooter Braun. The message being sent to me is very clear. Basically, be a good little girl and shut up. Or you’ll be punished.”

Swift said she thinks sharing her experience “could change the awareness level for other artists and potentially help them avoid a similar fate.”

Taylor wrote: “This is WRONG. Neither of these men had a hand in the writing of those songs. They did nothing to create the relationship I have with my fans. So this is where I’m asking for your help. Please let Scott Borchetta and Scooter Braun know how you feel about this.”

Fans have reacted to Taylor’s open letter by trending the hashtag #IStandWith Tayor. 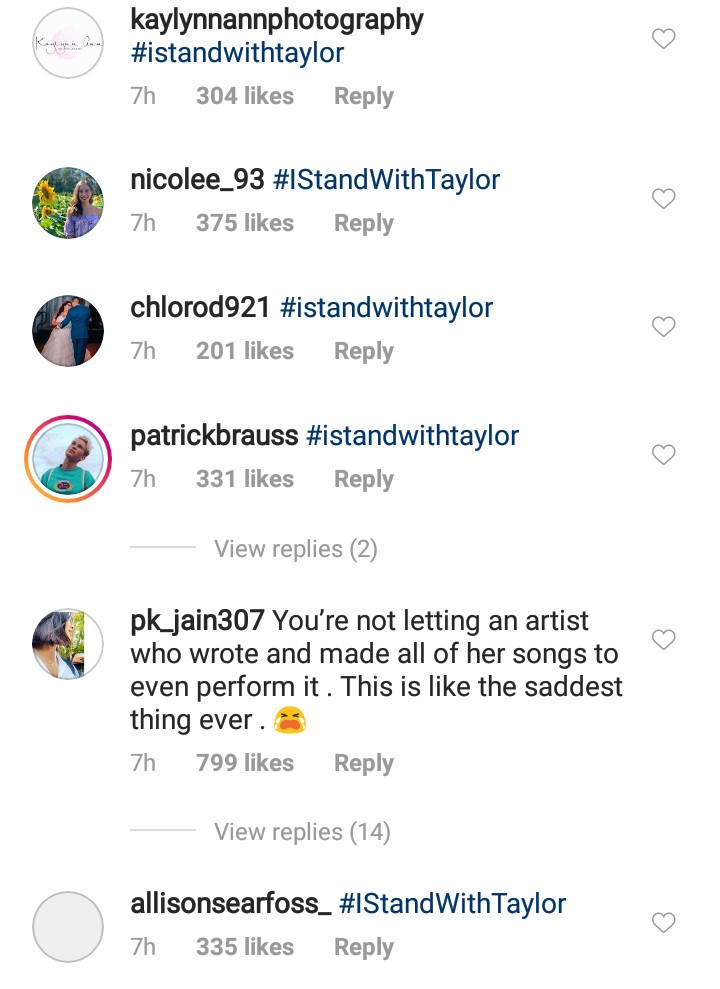