Two days ago Big Brother Naija housemates were asked to make use of the grey wall in the living room paintings that’ll leave an impression of themselves in the house.

With this task, Omashola took it upon himself to make a painting of the top 10 housemates left in the house, but Tacha wasn’t having it, she angrily erased herself from the painting.

When asked in the diary room how he felt about her action, Omashola confessed how much it hurt and how things could have turned ugly if not for self control.

Tacha however said she removed herself because it didn’t look nice and made her look like ‘Chucky Chucky’. 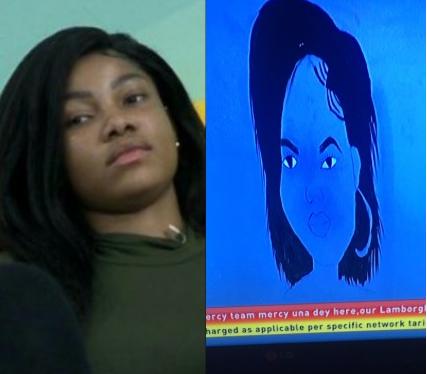 When Tacha erased herself from Omashola's painting, she never knew she was spiritually evicting herself #bbnaija

When Omashola painted the top 10HMs, Tacha deleted herself from the painting saying it's not fine🙆‍♂️ I guess that was the sign of this eviction!!! #BBNaija

Tacha cleared her painting from the top 10

She was disqualified on day 89.

She used her own hand to shoot herself in the leg.#BBNaija

Who'll give us the best graffiti in the #BBNaija House?
Who are you putting your money on?https://t.co/nQDb76MEia pic.twitter.com/Sl9nS6q9Z5

Omashola Da Vinci 😊😊…but Tacha u no try oo, why did u have to erase Omashola’s drawing of u on his work…not nice at all…I do not support u on this one Tacha 😞😞 #BBNaija