Nigerian Hip Hop has been picking up steam in the last couple of months and it seems to be getting hotter.

Last week, UB wrote about the status of the beef between MI Abaga and Vector.

Now, Vector has dropped yet another diss track aimed at MI and this time he got a response.

MI Tweeted, ‘my dear friend Loose Kaynon  always told me Vector can’t rap and I always said na.. bro is a great. Dear Vector if this is it you better think again.. I will slap your face 180 degrees my G. you make me feel like entering studio to respond to this bullshit is a waste of my time!!!!! But you insulted my fans.. so I will lower myself and give you what you have deserved.. tick tock nigga’.

Listen to the song below and see twitter reactions below…. 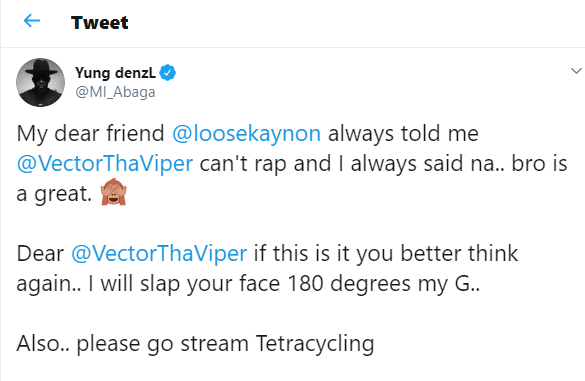 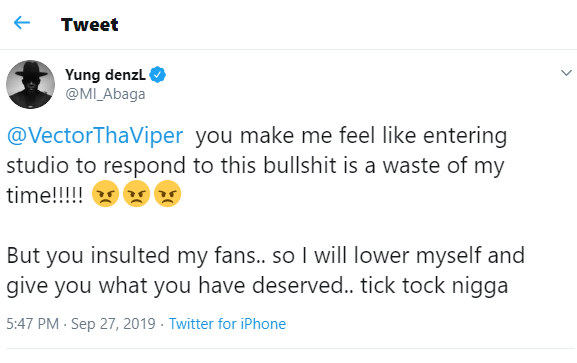 Someone should tell Vector that if he is coming for the king, he better not miss. Well, he has missed two shots now.

I don’t care if Vector’s diss was ABCD, drop your own ABCD or keep quiet.

Na so dem dey do am, no dey shalaye.

Vector scoring against himself after a nice first half @MI_Abaga pls finish now pic.twitter.com/Q0nozePCU6

Vector has dropped #ThePurge and #Tetracycling and M.I is there saying weak bars yen yen yen.

Oga shut up and reply the WEAK bars with your own SHORT bars and stop tweeting like coward.

Shey mi is not feeling well nii??? This one that vector bought malaria medicine for him

Did unku forget his primary assignment? Rapper. Not critic, sis.

Vector might be shit, but you're even more shit until you quit Twitter fingers and start dropping gems, sis.

Baba Enter studio and drop Bars, you're a Rapper not a critic, abi you dey fear? 🙄